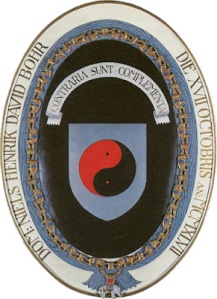 Niels Bohr was one of the most important physicists of the 20th century, a peer of Albert Einstein. In the previous post, I used Michael Frayn’s play Copenhagen to introduce Bohr and his contribution to quantum theory – the principle of complementarity.

Bohr was Danish. The highest honor of the Danish government is the Order of the Elephant, awarded to Danish royalty and sometimes to foreign heads of state. It is rarely awarded to a commoner. It was awarded to Bohr in 1947. Being a commoner, he did not have a coat of arms and upon receiving the order he designed his own – shown to the left.

Note the symbol of yin and yang and the Latin motto contraria sunt complementa (opposites are complementary).

Here is a definition of complementarity from a contemporary physicist:

Complementarity is the idea that there can be different ways of describing a system, each useful and internally consistent, which are mutually incompatible. It first emerged as a surprising feature of quantum theory, but I, following Niels Bohr, believe it contains wisdom that is much more widely applicable.

The “I” in that quote is Frank Wilczek, a physicist at the Massachusetts Institute of Technology who won the Nobel prize in physics in 2004 for work in quantum theory.

Bohr found much in common between the principle of complementarity and the ancient Chinese concept of yin and yang. So the basic idea has been around for a while. But Frank Wilczek goes on to make a point that I had not considered before:

Understanding the importance of complementarity stimulates imagination, because it gives us license to think differently. It also suggests engaged tolerance, as we try to appreciate apparently strange perspectives that other people have come up with. We can take them seriously without compromising our own understandings, scientific and otherwise.

“Engaged tolerance” is another name for civility. There has been much talk lately about civility, or the lack thereof, in our culture and politics. In my town of Cambridge, we recently had an election between Zac Mayo and Lucy Rogers for the Vermont House of Representatives in which civility was a major theme (more info). Zac and Lucy intentionally practiced civility in their campaigns, including a surprise musical duet that went viral and caught the attention of CBS Evening News. See On the Road with Steve Hartman 10/19/18. We are proud of the way that Zac and Lucy conducted their campaigns with civility, and they serve as an admirable example for the rest of us.

We could all use more civility in our lives. The point of this blog post is that perhaps thinking about complementarity can help us achieve more civility. 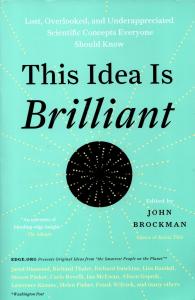 The quotes above by Frank Wilczek are from the book This Idea Is Brilliant by John Brockman. Mr. Brockman posed the following question to over 200 influential thinkers around the world: “What scientific term or concept ought to be more widely known?” Their answers constitute the book. Dr. Wilczek’s answer was complementarity.

It is perhaps appropriate that I learned about the book This Idea Is Brilliant from Zac Mayo. I blogged about that last month in Illusion of Explanatory Depth. That post also discusses civility, from a different angle.