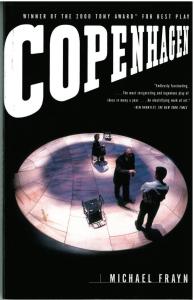 Copenhagen by Michael Frayn is a fascinating play about uncertainty, complementarity, friendship, morality, and the atomic bomb. Most of these themes are familiar words, but what the heck is complementarity?

Copenhagen is based on an historical event, a meeting in September 1941 between two physicists: Niels Bohr and Werner Heisenberg. Bohr’s wife, Margrethe, was also present. Heisenberg requested the meeting, and he traveled to the Bohr’s home in Copenhagen.

There is much uncertainty about what was discussed in that meeting. In Copenhagen, the ghosts of Werner Heisenberg, Niels Bohr, and Margrethe Bohr reminisce about what happened, or might have happened. Even after the fact, they aren’t too sure of what that meeting was all about.

Bohr and Heisenberg were colleagues and friends. They had worked together in the 1920s at the Institute of Theoretical Physics (which Bohr founded, now called the Niels Bohr Institute) at the University of Copenhagen. They both made major contributions to the new theory of quantum mechanics. Bohr won the Nobel prize in physics in 1922, Heisenberg in 1932. Heisenberg was 16 years younger than Bohr, and Niels and Margrethe Bohr had welcomed Heisenberg into their home almost as a son.

The United States had not yet entered World War II (that would happen in December 1941), but Europe was in flames. Bohr lived in Denmark, which was occupied by Germany. Heisenberg was German, and he was in charge of Germany’s efforts to develop an atomic bomb. He had questions about the bomb that he wanted to discuss with his friend. But the two friends were now enemies, too.

In September 1941 the United States had not yet begun to build an atomic bomb. The Manhattan Project was initiated in 1942, and in fact Bohr later consulted with the U.S. physicists working on that project. (He escaped from occupied Denmark in 1943.) The first atomic bomb was successfully tested at Los Alamos in July 1945, after Germany had surrendered in May of that year. Germany never succeeded in developing an atomic bomb. Did the conversation between Bohr and Heisenberg in September 1941 affect Germany’s efforts to develop the bomb? It is a tantalizing question that Michael Frayn explores in this captivating play.

Bohr’s major contribution to quantum theory was the principle of complementarity. That is not a word that we commonly use, but the concept is familiar. There is a duality in much of our world, which Bohr noticed in the wave-particle duality of matter and energy.

Niels Bohr was not the first to notice duality in our world. The idea goes back at least to the concept of yin and yang in ancient Chinese philosophy. 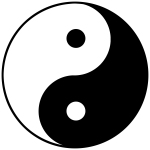 The theme of complementarity (aka duality, aka yin and yang) is extensive in Copenhagen. Examples:

I am going to end this post here, having achieved my goal of introducing Niels Bohr and the concept of complementarity. My next post discusses complementarity and civility.

There is much more that can be said about Copenhagen. About ten years ago, I wrote a series of posts about this play. See Freedom and Authority: Copenhagen. That discussion goes into more detail about quantum mechanics and how it relates to the themes in the play, including attention to both Bohr’s contribution to quantum theory (complementarity) and Heisenberg’s contribution (uncertainty).