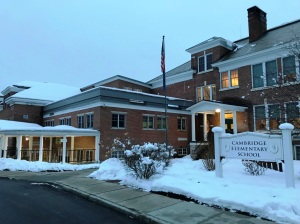 What does Act 46 mean for democracy?

Before considering that general question, let’s review a more specific question: What happened with Act 46 in Cambridge?

The short answer is that the town lost control of its elementary school. The photo shows the Cambridge Elementary School on November 30, 2018.

My town of Cambridge, Vermont, had its own high school until the 1960s when six towns in northern Lamoille county, including Cambridge, combined grades 7-12 into a single, new facility in Hyde Park: Lamoille Union Middle and High Schools. The towns retained their separate elementary schools.

Many towns in Vermont went through a similar process in the 1960s. Towns joined together to form union school districts to afford larger high schools, while retaining town school districts for smaller elementary schools.

Act 46 provided incentives to merge if towns did so voluntarily, and penalties if they did not. Once those incentives and penalties were better understood, the school board for the Cambridge town school district asked the voters in Cambridge to reconsider the proposed merger. There was a second vote on March 7, 2017. Cambridge voters again said no, this time by a vote of yes-219 to no-309. This was a more emphatic NO. Voter turnout increased by 80% and the percent “no” votes increased from 56% to 58%.

The goal of Act 46 is to address legitimate issues with the cost and quality of education in Vermont. It remains to be seen if Act 46 will be a positive or negative factor in terms of those educational goals, but that is not the topic of this post. This post is about the effects of Act 46 beyond the educational system.

Consider the question in the header of this blog:

What is a proper relationship between a free people and their government?

I believe that Act 46 has done unambiguous harm to this relationship in two ways.

First: Act 46 adds distance to the relationship between town and school. The school has been one of the major institutions in our town that define the fabric of our community. In turn, the town has strongly supported the school because townspeople felt that it was “our” school, belonging to the entire town, not just the students and teachers. Act 46 disrupts this feeling of ownership which has been mutually beneficial to both town and school. I fear the long term consequences will be negative for both town and school.

Second: In Vermont, are we still a free people? Citizens who make decisions about the structure of their government based on government-contrived incentives and penalties are not making free decisions. Even more concerning, when citizens are asked to vote on major issues, and their decisions are not followed, we have done major damage to the foundations of our democracy.

For more about Act 46 in Vermont, see articles in VTDigger with the “Act 46” tag.

The views expressed on this blog are my own, and are not the views of the selectboard for the town of Cambridge on which I serve.

2 Responses to Act 46 and Democracy