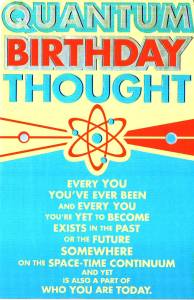 The image to the left is a birthday card. Inside the card it says:

Don’t worry… It will make more sense after you start drinking.

In 1961-63 Feynman created and taught a completely revamped two-year introductory physics course at Caltech, known as The Feynman Lectures on Physics. These famous lectures were published and are now available online for free at the link in the preceding sentence.

The third lecture was titled “The Relation of Physics to Other Sciences” and Feynman ended the lecture as follows:

A poet once said, “The whole universe is in a glass of wine.” We will probably never know in what sense he meant that, for poets do not write to be understood. But it is true that if we look at a glass of wine closely enough we see the entire universe. There are the things of physics: the twisting liquid which evaporates depending on the wind and weather, the reflections in the glass, and our imagination adds the atoms. The glass is a distillation of the earth’s rocks, and in its composition we see the secrets of the universe’s age, and the evolution of stars. What strange array of chemicals are in the wine? How did they come to be? There are the ferments, the enzymes, the substrates, and the products. There in wine is found the great generalization: all life is fermentation. Nobody can discover the chemistry of wine without discovering, as did Louis Pasteur, the cause of much disease. How vivid is the claret, pressing its existence into the consciousness that watches it! If our small minds, for some convenience, divide this glass of wine, this universe, into parts—physics, biology, geology, astronomy, psychology, and so on—remember that nature does not know it! So let us put it all back together, not forgetting ultimately what it is for. Let it give us one more final pleasure: drink it and forget it all!

Quantum physics is strange. Feynman once said: “I think I can safely say that nobody understands quantum mechanics.” (source – the quote comes from lecture #6)

A few years ago I read a fascinating book titled Quantum Reality. Click here for an overview of the ideas in the book. Interesting stuff.