Democracy in the Mountains 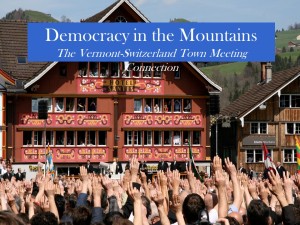 The Varnum Memorial Library in my village of Jeffersonville, Vermont, recently hosted a talk titled “Democracy in the Mountains: The Vermont-Switzerland Connection” by Susan Clark.

Several posts on this blog have discussed town meetings in New England generally, and specifically in my town of Cambridge, Vermont. Susan is the town meeting moderator in Middlesex, Vermont. Her talk was about Switzerland, which she visited for several months a few years ago to study their town meetings. From the description of her talk:

Gorgeous mountains, vibrant farms, flocking tourists, even chocolate–Vermont has a lot in common with Switzerland. But few New Englanders know that Switzerland is the only other place in the world with whom we share one other proud tradition: town meetings.

Lasting democracy requires effort. Effort as in attending meetings and engaging in discussions with your neighbors, face-to-face as much as possible. Merely voting at the ballot box is not enough.

Lasting democracy comes from the bottom up, not the top down. In both Switzerland and New England, towns existed first and other political entities (counties, cantons, states, the nation) came later. Democracy started in the towns. That is an important lesson that in today’s modern world we are in danger of forgetting.

Democracy can be messy. Not everyone is happy with their government and with their neighbors all the time. But if we remember to treat each other as human beings, we can figure out a way to get along. Sharing food helps. The Swiss include wine or beer with their shared meals at town meeting.

The first lesson is the hardest one for me. Why isn’t voting at the ballot box enough? Why do I have to spend so much time on this self-government thing? Time is precious.

But this lesson is critical. Democracy does not thrive unless citizens invest their time to make self-government work. The alternative is to be ruled by others.

I first met Susan Clark in 2013 because of a book that she co-authored in 2012 with Woden Teachout: Slow Democracy: Rediscovering Community, Bringing Decision Making Back Home. One of the themes of this book is the importance of citizen engagement and how this takes time. Hence the theme “slow.”

Susan came to Cambridge in 2017 to help with the work of the Community Engagement Team which was tasked with making improvements in our town meeting. Many of us in Cambridge read and appreciated the book that she co-authored in 2005 (updated in 2015) with UVM professor Frank Bryan: All Those in Favor: Rediscovering the Secrets of Town Meeting and Community. One of the themes of this book is the importance of town meeting and discussion, not merely voting at the ballot box.

Susan’s recent talk about Switzerland reinforced these themes for me. She quoted Swiss people as saying that voting is the last thing to do, only after much discussion aimed at trying to find common ground. Susan also said the Swiss were surprised that we have town meeting only once a year. Every Swiss town holds town meeting at least twice a year, and in many towns several times a year.

Susan’s talk at the Varnum Memorial Library was on Wednesday, October 23. The discussion after her presentation was also stimulating. Several people in the audience had Swiss relatives or had traveled in Switzerland. There are many interesting people in Cambridge, Vermont!

The photo above is Swiss citizens voting at the Appenzell Landsgemeinde (a canton-wide outdoor meeting). Photo courtesy of Mark Bushnell.

2 Responses to Democracy in the Mountains