Anne Frank and the Four Freedoms 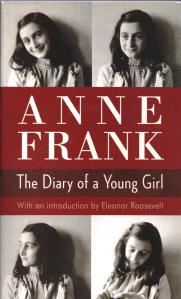 Anne Frank and President Franklin Roosevelt did not know each other, but there is a profound connection between them: the Four Freedoms.

In this speech President Roosevelt described the war then raging on four continents as attacks by dictator nations on democratic nations. He warned about the risks to our safety and our democracy in the United States if the democratic nations were defeated.

At the end of the speech, President Roosevelt explained what the democracies of the world were fighting for – what he called the Four Freedoms:

Anne Frank’s diary provides an affecting and honest account of what life is like when the Four Freedoms are progressively taken away:

See The Diary of Anne Frank.

President Roosevelt used the theme of the Four Freedoms to explain why it was necessary for the world’s democratic nations to fight against aggressor nations. Any grand theme is made more vivid by examples. Anne Frank’s diary, a poignant account by a young girl, is one example that illustrates what President Roosevelt was talking about.

Neither Anne Frank nor President Roosevelt lived to see the end of World War II in Europe in May 1945, but both Anne’s diary and the Four Freedoms continue to influence our world today. First Lady Eleanor Roosevelt, President Franklin Roosevelt’s widow, had a hand in both.

After World War II ended, Eleanor Roosevelt was instrumental in the development of the United Nations. She made certain that the Four Freedoms were included in the UN’s Universal Declaration of Human Rights adopted by the UN General Assembly in 1948.

See Legacy of the Four Freedoms.

The first English translation of Anne Frank’s diary was published in 1952. Mrs. Roosevelt wrote the Introduction to the edition that I read, pictured above, available here. The first two sentences in Mrs. Roosevelt’s Introduction:

This is a remarkable book. Written by a young girl—and the young are not afraid of telling the truth—it is one of the wisest and most moving commentaries on war and its impact on human beings that I have ever read.

I encourage everyone to read Anne Frank: The Diary of a Young Girl, or to re-read it if you read it long ago. Our world is not yet secure in the Four Freedoms.