Norman Rockwell’s famous paintings of the Four Freedoms are shown below:

These paintings illustrate the Four Freedoms that President Franklin Roosevelt introduced in a speech to Congress in January 1941:

The White House asked writers and artists to promote the Four Freedoms. Rockwell, then living in the small town of Arlington, Vermont, was inspired by the Four Freedoms, but he struggled to conceive of a way to illustrate them. In early 1942 he had a flash of inspiration.

Rockwell’s insight was that freedom of speech could be illustrated by an incident that he had witnessed the prior year at an Arlington, Vermont town meeting. He decided that he would illustrate all of the freedoms “using his neighbors as models to show people living the Four Freedoms ‘in simple, everyday scenes.’” (source, p. 41)

Rockwell made sketches of his ideas and went to Washington, DC with his friend and neighbor Mead Schaeffer to sell them to the federal government. He was rebuffed. No one that he talked to was interested.

On their way home to Vermont from Washington, Rockwell and Schaeffer made an impromptu stop in Philadelphia at the headquarters of the Saturday Evening Post. Rockwell was already creating covers for the weekly magazine. Would the Post perhaps be interested in his ideas for illustrating the Four Freedoms?

The answer was YES! Editor Ben Hibbs told Rockwell to drop everything else he was doing and just work on oil paintings of the Four Freedoms. Rockwell spent the rest of 1942 on that project, losing 15 pounds in the process.

Hibbs arranged for an essay to be paired with each of the four paintings. The paintings and essays were published inside the Saturday Evening Post, not on the cover, in four consecutive issues beginning February 20, 1943. They were an instant hit. The Post received more than 60,000 favorable letters.

The federal government noticed the appeal of Rockwell’s paintings and asked the Saturday Evening Post if posters could be made of the paintings to be used to sell war bonds. The answer was YES! Four million copies of the following posters were made: 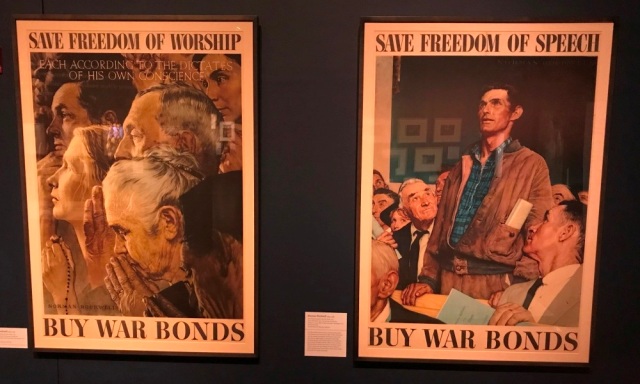 In my earlier post Roosevelt’s Four Freedoms, I noted that there are two groups of freedoms. Freedom of speech and worship are not the same as freedom from want and fear. The war bond posters recognize this difference. For freedom of speech and worship, they say “SAVE”; while for freedom from want and fear, they say “OURS…to fight for.”

Photo credits: I took the photos above at a special exhibit titled “Enduring Ideals: Rockwell, Roosevelt & the Four Freedoms” at The Henry Ford Museum in Dearborn, Michigan. See the post Legacy of the Four Freedoms for more discussion about this exhibit. Photos taken October 18-19, 2018.