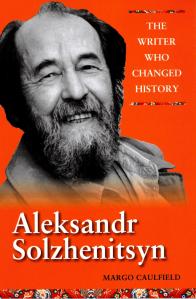 Through the power of his words, Aleksandr Solzhenitsyn helped change the world. He wrote about Russia, the country in which he was born and where he died. He won the Nobel Prize for Literature. His writings helped bring about the downfall of the Union of Soviet Socialist Republics (USSR or Soviet Union), which began and ended in his lifetime. But surprisingly the place where he lived the longest, and where he was the most productive, was Cavendish, Vermont.

Aleksander Solzhenitsyn lived from 1918 to 2008. The 100th anniversary of his birth is being celebrated in Vermont this year. Who was this man and what did he do? And what was his connection to Vermont?

Solzhenitsyn always wanted to be a writer. His first published work was One Day in the Life of Ivan Denisovich published in the Soviet Union in 1962. This fictionalized account of a day in the life of a prisoner in the Soviet prison camp system (the “Gulag”) quickly became much talked about in the Soviet Union and around the world. Solzhenitsyn wrote powerfully, drawing on his own experience in the Gulag from 1945 to 1953. I and many others of my generation read this work in high school (the early 1970s for me).

Solzhenitsyn subsequently wrote The Gulag Archipelago, a longer work of nonfiction which extensively documented the Soviet prison camp system. (An archipelago is a cluster of islands. The vast prison camp system was spread across the Soviet landmass like islands in a sea.) This work was completed in 1968 but not immediately published. It was smuggled to the West and first published in Russian in Paris in 1973.

Meanwhile Solzhenitsyn had been writing other works which were published mostly in the West, and his collective writings won him the Nobel Prize for Literature in 1970, even before The Gulag Archipelago was known.

All of these events increased tension with the authorities, and in 1974 Solzhenitsyn was expelled from the Soviet Union. After living briefly in Switzerland, he and his family settled in 1976 in Cavendish, Vermont. He lived there for 18 years – the longest period of his life that he lived in one place. In 1994 Solzhenitsyn returned to his native Russia where he lived until his death in 2008 at age 89.

Solzhenitsyn’s life must be understood in the context of Russia’s history in the 20th century. World War I exhausted Russia, and the Russian Revolution in 1917 at the end of the war resulted in the overthrow of the tsar (i.e., monarchy). That was the year before Solzhenitsyn’s birth. Following the revolution, Russians fought a bloody civil war primarily between the Whites and the Reds (also called the Bolsheviks). Vladimir Lenin’s Bolsheviks prevailed and in 1922 the Soviet Union was established with a Communist form of government. Lenin died in 1924 and was succeeded by Joseph Stalin who ruled the Soviet Union with an increasingly authoritarian hand until his death in 1953.

Meanwhile Solzhenitsyn grew up, attended Rostov University (1936-1941), and served in the Soviet Army (1941-1945) during World War II. During this time he was a committed Communist, and he distinguished himself at both the university and in the army.

But during the war Solzhenitsyn wrote letters that were critical of Stalin, and in 1945 he was arrested, convicted, and sentenced to eight years in a labor camp. He was released on schedule in 1953, coincidentally on the day that Stalin died. The war and especially the Gulag transformed Solzhenitsyn. He was now ardently opposed to Communism.

Internal Soviet repression began to slowly ease under Nikita Khrushchev, Stalin’s successor. It was Khrushchev who personally authorized the publication of One Day in the Life of Ivan Denisovich in 1962. But Khrushchev was ousted from power in 1964 and life again became more difficult for Solzhenitsyn, eventually leading to his exile in 1974 as noted above.

In exile Solzhenitsyn wanted more than anything else to write. In particular, he wanted to finish a history of the Russian Revolution that he had begun years earlier. He had conceived of The Red Wheel when he was 17 years old and a committed Communist. Originally he wanted to document what he considered to be one of the greatest human accomplishments in modern history. But events changed his perspective, and he now considered the revolution to have been the greatest catastrophe in Russian history.

Cavendish offered Solzhenitsyn solitude to work and also the nearby library facilities of Dartmouth College for research. The Cavendish general store had a sign: “No restrooms, No bare feet, No directions to the Solzhenitsyn home.”

Solzhenitsyn considered The Red Wheel to be his most significant work, and he mainly wrote it in Cavendish. This work, part history and part historical fiction, documented the tragedy that the Bolsheviks wrought upon Russia, from the beginning of World War I in August 1914 to the conclusion of the Russian Revolution in November 1917. It encompassed ten volumes, with the last volumes published in 1991 and not yet translated into English.

Meanwhile the Soviet Union collapsed in 1991. Solzhenitsyn’s writings, especially One Day in the Life of Ivan Denisovich and The Gulag Archipelago, contributed significantly to that collapse. By 1994 Solzhenitsyn felt safe to return to Russia where he continued to write until his death in 2008.

Solzhenitsyn loved his native Russia, but not the Soviet Union. He once said:

This brief introduction to Aleksandr Solzhenitsyn necessarily leaves out many important details about his life, his family, and his religion (Russian Orthodox). I neglected to mention that he nearly died from cancer in the 1950s, and from poisoning by the KGB in 1971; close encounters with death tend to focus one’s mind. Most significantly, I have not begun to consider Solzhenitsyn’s vast writings across a wide range of genres—including his advice for the future to both the West and to Russia after Communism.

For more information, a good place to start is Aleksandr Solzhenitsyn: The Writer Who Changed History by Margo Caulfield (2016), pictured above. Ms. Caulfield is the president of the Cavendish Historical Society and a teacher. The quote above is from this book, and is from remarks that Solzhenitsyn made when introducing himself to his new neighbors at the Cavendish annual town meeting in 1977.

The Soul and Barbed Wire: An Introduction to Solzhenitsyn by Edward E. Ericson, Jr. and Alexis Klimoff (2008)

From The Gulag Archipelago, quoted at the beginning of The Soul and Barbed Wire:

The line separating good and evil passes not through states, nor between classes, nor between political parties, either—but right through every human heart—and through all human hearts. This line shifts. Inside us, it oscillates with the years. And even within hearts overwhelmed by evil, one small bridgehead of good is retained. And even in the best of all hearts, there remains…an unuprooted small corner of evil.