2008 Financial Crisis: What can we learn?

Posted on September 8, 2018 by George Putnam 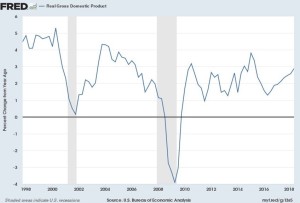 Financial markets crashed ten years ago. See my previous post for what happened and comments about the graph to the left. This post is about lessons that we can learn from that crisis.

This post is about two different causes: debt and models.

A standard way to measure debt is to calculate the ratio of two numbers on a balance sheet: net worth as a percent of assets. The lower the number, the more debt. Financial institutions refer to net worth as capital, and they call this ratio a capital ratio. 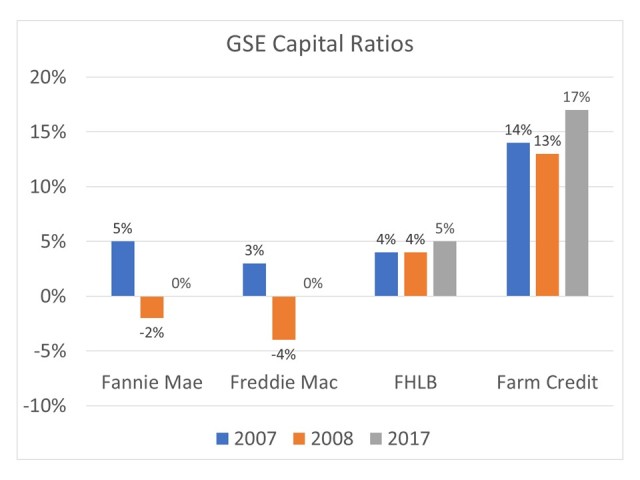 The takeaway is that the three housing GSEs are all thinly capitalized with capital of 5% of assets or less, and negative for Fannie Mae and Freddie Mac after they were taken over by the government in September 2008. Today, ten years after the financial crisis, Fannie Mae and Freddie Mac remain in conservatorship, run by the Federal Housing Finance Agency. They had capital ratios of 0% at the end of 2017. They are not viable standalone institutions in their current form.

What is a “good” capital ratio for a financial institution? Dr. Anat Admati and Martin Hellwig considered that question in their 2013 book The Bankers’ New Clothes: What’s Wrong with Banking and What to Do about It. Their answer: more. They did not recommend a specific number, but suggested that 20-30% was reasonable. Click here for a review of the book.

Financial institutions manage risk, and they use all sorts of data and mathematical models to do so. Your personal credit score is an example of this concept.

It is likely that no model will ever be sufficient to calculate and manage risk with the precision that some financial institutions assumed prior to 2008. Some things can be calculated, and some cannot. For example, it is possible to calculate with considerable precision the time of day and the location on the horizon where the sun will rise six weeks from today. (Well, it is possible for someone to calculate it. The rest of us can look it up.) But it is not possible to calculate with any accuracy the percentage of the sky that will be covered with clouds at that time, or where those clouds will be.

Financial institutions assumed that risk was in the first category (things that can be calculated). The lesson of 2008 is that risk falls into the second category.

In other words, be honest with yourself about what you know and what you don’t know, and act accordingly. Or as my favorite physicist Richard Feynman put it:

The first principle is that you must not fool yourself – and you are the easiest person to fool.

Feynman was speaking to future scientists (Caltech graduates) about science, but the principle applies to us all.

Since we don’t know everything ourselves, we must rely on experts, right? Especially if they employ mathematics and the tools of science, right? Not so fast. Feynman again:

Science is the belief in the ignorance of experts. … The experts who are leading you may be wrong.

In this case, Feynman was speaking to science teachers, but again the principle applies to us all.

Financial institutions should be cautious about relying on experts armed with risk models.

In September 2009, one year after the financial crisis, I wrote about “lessons learned” on the Yankee Farm Credit blog. This post is drawn in part from those posts. There is more discussion, especially about risk models, in those posts: