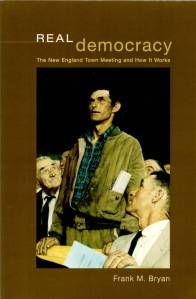 Town meeting day in Vermont is the first Tuesday in March. Town meeting in my town of Cambridge was better this year than last year, and much of the credit is due to the Community Engagement Team (CET) created by the selectboard following last year’s town meeting.

Several changes were made this year as a result of the CET’s recommendations. More microphones were used, and a podium was provided for the moderator. More and better food choices were offered. The meeting start time was changed from 10:00 a.m. to 9:00 a.m. The old start time was appropriate when many citizens were dairy farmers and had morning chores to do, but few citizens are dairy farmers now.

The CET provided civic information with new material in the annual town report, a series of posts on Front Porch Forum in the weeks leading up to town meeting, and a new brochure on the chairs at town meeting.

For the first time, the meeting was live-streamed. You can watch the recorded video here. This is real democracy and local community engagement in action!

Changes were made to the warning for the meeting (i.e., the agenda). The goal was to simplify and clarify the warning, and also to put substantive issues before the voters. People are more willing to engage when they know that they can make a difference.

Some of the issues that were decided on Tuesday:

The discussion about the commuter bus illustrates, in my view, town meeting at its best. The discussion at last year’s town meeting was confused. The discussion this year was MUCH better. We had our facts straight. Citizens asked good questions and made good comments. Last year no one from Green Mountain Transit, the regional transit authority that operates the bus service, was present to answer questions. This year Chapin Kaynor, the chair of GMT’s board of commissioners, was present. He spoke and answered numerous questions. He also heard several thoughtful suggestions from citizens about how the bus service could be improved.

The vote was by show of hands and it was approved by such an overwhelming majority that there wasn’t even a count; there was no need. I personally voted against the bus because for me the level of ridership does not justify the expense. (See this post from last May for information about ridership and costs.) But I am greatly pleased with the process we went through to make a decision, and I fully support the outcome. This is how town meeting should work! You can’t get community engagement like this with just a ballot box. This level of community engagement only happens by having a true town meeting where people come together face-to-face, talk to and listen to each other, and make decisions.

The video shows the discussion and vote about the commuter bus from 2:12 to 2:37.

There were two paper ballot votes during town meeting this year, and the highest number of ballots cast in those two votes was 213. Last year there was one paper ballot vote and the total number of ballots cast was 216. So attendance was about the same as last year, but that’s not a bad result. Last year there was an open seat on the selectboard which generated considerable interest. There were no similar open positions this year to draw people to town meeting. I expect there will be good attendance next year when there are two new positions on the selectboard.

Another factor that adversely affected attendance this year was the weather. It was a beautiful day, and I know several farmers who did not attend or who left early. Not dairy farmers, but maple sugarmakers. The sap was running! It’s possible that a few people chose skiing over town meeting, too.

(For an explanation of the image at the top of this post, see this.)

Like Loading...
This entry was posted in General and tagged Cambridge, Community Engagement Team, Town Meeting. Bookmark the permalink.