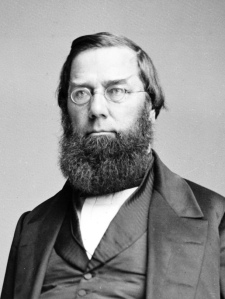 George Perkins Marsh has been called the “Father of the American Conservation Movement” because of his seminal book Man and Nature published in 1864. Today his legacy is honored by the Marsh – Billings – Rockefeller National Historic Park encompassing his childhood home in Woodstock, Vermont. The story of the man, the book, and the park is fascinating.

George Perkins Marsh was born in Woodstock in 1801. His father, one of the preeminent lawyers in the new state of Vermont, taught him to be a careful observer of nature. Marsh later wrote that at the age of four and a half, he learned from his father the importance of a “watershed.”

Marsh was highly intelligent and a voracious reader, teaching himself approximately twenty languages including Greek and Latin. He graduated from Dartmouth College at age 19 but was mostly self-taught. Throughout his life, he soaked up information at every opportunity from both books and nature.

Marsh became a lawyer and moved to Burlington, Vermont. He tried several business ventures but was not particularly successful at either business or law. He was more successful as a politician, serving with distinction first in the Vermont legislature and then in the U.S. House of Representatives 1843-1849. In Washington he played a key role in the founding of the Smithsonian Institution.

But Marsh never forgot the lessons of nature that began at his father’s knee. In 1847 Congressman Marsh gave a salutary speech to the Agricultural Society of Rutland County in which he described the harms resulting from the deforestation that had occurred over much of Vermont “within a single generation,” and he called for improved stewardship of forests. This speech presaged his later book Man and Nature.

Marsh longed for a diplomatic job in Europe, and in 1849 President Zachary Taylor appointed him as minister to the Ottoman Empire. (The photo above is a Mathew Brady portrait taken before leaving for Turkey.) That was not Marsh’s first choice, but it proved to be significant. George and his wife Caroline lived in Constantinople (now Istanbul) for nearly four years. Among their many travels in Europe and around the Mediterranean during this period, they took a journey of several months through Egypt and Palestine. Their travels took them through deserts, some of which Marsh knew from his studies of classical texts had been lush and productive in ancient times.

George and Caroline returned to Burlington in 1854. One of Marsh’s jobs back in Vermont was leading a commission to rebuild the State House in Montpelier – which still stands today – following a fire in 1857. Another job was Vermont Fish Commissioner. Why were fish in Vermont’s rivers declining? Marsh’s report identified the same culprit as his 1847 speech: deforestation. He began to formulate in his mind a book that would explore the effects of human activities on the environment.

In 1861 President Abraham Lincoln appointed Marsh as ambassador to Italy. He finally had his dream job at age 60. George and Caroline moved to Italy where they lived happily and he served honorably as ambassador under presidents Lincoln, Johnson, Grant, Hayes, Garfield, and Arthur (a fellow Vermonter) until his death in 1882. He never returned home. His body is buried in Rome.

Marsh began work on his book soon after moving to Italy, and in 1864 he published Man and Nature. The book begins with a discussion of the Roman Empire, which had been headquartered in Rome of course, and had encompassed, at its greatest extent, all of the Mediterranean and European territory that he and Caroline had experienced, and much more. Marsh wrote about how “more than one half” of the vast and flourishing lands of the Roman Empire had lost their productivity due to mismanagement by humans, primarily deforestation. The book promoted the idea of the interdependence of man and nature. It was well received and widely read, and it helped launch the modern conservation movement in the United States.

One of the people influenced by Man and Nature was Frederick Billings. He had lived in Woodstock as a young man, leaving at the age of 25 in the California gold rush of 1849. Like Marsh he was a lawyer and a businessman, but a successful one. Billings made a fortune in California and later, after he returned east to New York City, in the railroad business (Northern Pacific Railway). Billings, Montana, founded as a railroad town, is named for him.

Billings saw themes in Man and Nature that resonated with the harm from deforestation that he saw in his native Vermont, as well as things he had seen in the denuded gold fields of California. Billings loved Woodstock. He knew the homestead where George Perkins Marsh had been raised. In 1869 he purchased it, and soon set about to create a model farm that would put into action the conservationist principles espoused by Marsh, including the replanting of trees on the barren hillsides above Woodstock.

The Billings Farm grew to be a substantial enterprise. At its greatest extent, it encompassed about 1,000 acres and employed more than 100 workers. After Frederick Billings died in 1890, the farm was carried on by his widow, then his daughters, and eventually a granddaughter, Mary French. In 1934 Mary French married Laurance Rockefeller, a conservationist himself, and a grandson of John D. Rockefeller.

Mary and Laurance Rockefeller died in 1997 and 2004, respectively, but through their energy and generosity the legacy of George Perkins Marsh continues in Woodstock today. Route 12 divides the property. On the east side is the Billings Farm & Museum, which the Rockefellers opened to the public in 1983. On the west side is the Marsh – Billings – Rockefeller National Historic Park, which the Rockefellers donated to the National Park Service in 1992. The park includes Marsh’s birthplace (expanded into a mansion by Billings and the Rockefellers), a carriage barn which is the visitor center for the park, and more than 500 acres of managed forestland on Mount Tom overlooking the village of Woodstock. Mount Tom had once been nearly shorn of trees. No more.

Both sides of Route 12 are worth a visit. Give yourself plenty of time to wander through the houses, barns, other buildings, exhibits, gardens, fields and woodland trails. On the park side of the road, find the Belvedere, the Forest Center, and the Pogue. For highlights of the other side of the road, see this post on my other blog about a recent visit to the Billings Farm & Museum.

I think George Perkins Marsh would be pleased with how his legacy is remembered in Woodstock, but there is irony here. Marsh did not like business. He preferred intellectual pursuits rather than troubling himself with the details of business. Marsh did not like businessmen. He felt that his many business failures were due to the “naturally greedy” nature of businessmen who had taken advantage of him. Marsh especially did not like railroad men: “My anathema on the scoundrel railroaders and on all railroads whom I loathe with all my soul!” (source p. 91) He had had several misadventures as a passenger, but perhaps the main source of his ire was a substantial loss he had suffered on an ill-timed investment in Vermont Central Railroad.

Yet Marsh’s legacy is preserved in Woodstock with wealth created by two “robber baron” businessmen – Frederick Billings and John D. Rockefeller, through their grandchildren. Billings, the man who conceived the idea of showcasing Marsh’s conservationist principles on the very land where Marsh had been raised, was himself a “scoundrel railroader.” Perhaps the business of business, even the railroad business, is worthy of more respect than Marsh granted it.

It is a fascinating world, both the natural world and the people in it. Man and Nature.