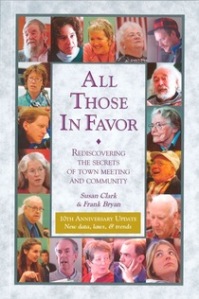 Town meetings in small towns in New England are unique. Voters come together in person at least annually to decide local issues. This is direct democracy as it was once practiced in ancient Athens. Today no other places in the world, except perhaps the cantons of Switzerland, practice direct democracy like this.

Not everyone is satisfied with town meetings. In my town of Cambridge, Vermont, there was discussion at town meeting this year about how to involve more people, especially young people. Others are also having discussions about town meeting. This blog post contains links to discussions that I know about.

The following article appeared in Seven Days on March 8, 2017, the day after town meetings in Vermont:

This article questions the durability of town meetings.

In 2016 the town of Stowe (just south of Cambridge) created a Town Meeting Task Force “to study the reasons for the decline in voter participation at the annual Town Meeting and to make recommendations on ways to increase participation.” Their report dated November 7, 2016 is at the link in the preceding sentence. Click here for an article in the Stowe Reporter about the 2017 Stowe town meeting, including action on one of the recommendations in the Town Meeting Task Force report.

This article credits the culture fostered by town meeting as a key reason for making Vermont a desirable place to live. (Perhaps the same can be said of Switzerland?)

The New England public radio program “Next” had a segment about town meetings on March 16, 2017 (Episode 33):

This 18 minute radio program discussed town meetings in several towns in New Hampshire and Vermont. The issues discussed in Wilmington, Vermont were the same as the issues raised in Cambridge: How to involve more young people? Should town meeting be held at a different time of day or on a different day of the week? Should voting for town officers and the town budget be by Australian ballot instead of during the meeting?

All of the above items have something in common – they all mention this book:

All Those In Favor: Rediscovering the Secrets of Town Meeting and Community

or its authors – Susan Clark and Frank Bryan. The image above is the book cover. Susan Clark is an author and educator, and the town moderator in Middlesex, Vermont. Frank Bryan is a professor emeritus of political science at the University of Vermont who has studied town meetings for more than 30 years. The book was published in 2005 and republished with an update in 2015.

The book All Those In Favor makes the case that, done right, there is no better form of local government for small towns than town meeting. The book includes a thorough discussion of the implications of Australian balloting – i.e., voting via preprinted ballot as opposed to voting during the meeting following discussion.

Anyone interested in studying town meetings will find useful information in all of the above links, and especially in the book All Those In Favor.

Full disclosure: While I do not know Professor Bryan, I know Susan Clark. She wrote another book on a similar theme – Slow Democracy: Rediscovering Community, Bringing Decision Making Back Home – with coauthor Woden Teachout (Frank Bryan wrote the Foreward). I met Susan in 2013 as a result of this book, and we did a joint presentation together.